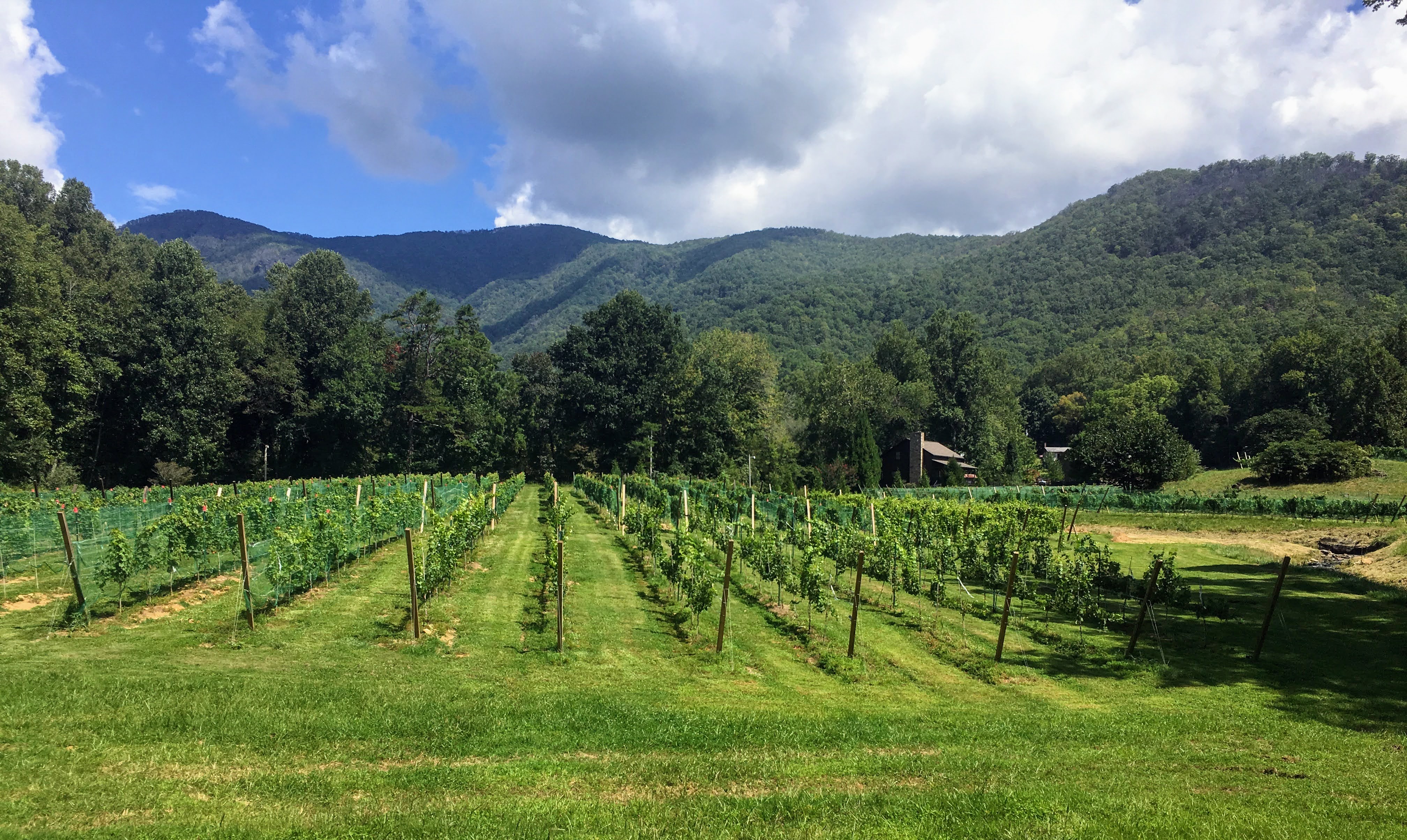 Great wines come from great grapes. Great grapes, however, are only produced when numerous growing condition components are delicately yet skillfully balanced. This area of Western North Carolina finds its origins dating back over 20 million years ago as the Appalachian Mountains continued to evolve. During Earth's cooling periods, this area would have been covered by glacial ice and areas to the south and east were likely under shallow seawater. These cooling and warming periods leading to continuous erosion and movement give us both the gentle slopes we see today and an incredibly unique soil composition.


The soil makeup at Shooting Creek Vines is classified as mineral in nature and consists of combinations of tate loam, tate gravelly loam, and french fine sandy loam. These combinations include rocks, broken down organic matter, sand, silt, and clay. The rocks range from quartz, marble, granite, limestone, and a variety of 'gallets' or 'puddle stones' as they are called in France. Locally, we call them river stones since their round and smooth shape comes from the flow of water.


We collect these rocks and place them below the vines. The rocks absorb heat from the sunlight during the sultry afternoons and radiate it back to the vines in the cool evenings. This practice with this soil type results in spicy, rich, full-bodied red wines and crisp, refined, semi-dry, white wines with great floral aromas. This soil type most closely resembles the soil near the Southern Rhone region of France at Chatueuneuf-du Pape. It is said the vines take to this soil type with great vigor.


Shooting Creek Vines is a small, family-owned winery founded in 2017. In our inaugural year, we planted nearly 2,500 vines in four red varieties. The first cornerstone block, set at 35 02'2" N 83 39'4" W, is planted in Syrah, followed by Merlot, then Zinfandel, and Cabernet Sauvignon across the creek. In 2018, we added a block of Chardonnay and a block of Traminette, both white grape varieties. We currently have plans to expand into areas across the creek and add additional varieties of white grapes.


Shortly after planting our first blocks, we wanted to learn the historical significance behind several nearby features having 'Vineyard' in their name. In research, we came across a single paragraph describing the origins of the Shooting Creek community founded in 1849. Sometime between 1850 and 1870 an 'unremembered' Englishman arrived and planted several small vineyard plots scattered across the mountain range and surrounding valleys. Three years later, with no prosperity from his crop, he disappeared from history.


Some neighbors and families with multi-generational ties to this valley recall stories about this 'unremembered' Englishman and his failed ventures, and believe some vines may remain today, hidden in the rugged terrain. We are actively searching the countryside to find these original or relative vines to graft and reproduce the legacy of this Englishman to tie our vineyard back to its predecessor nearly 170 years later.